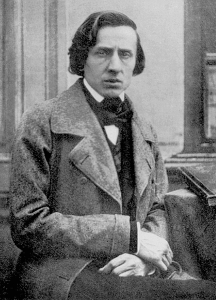 While I was djing at a local milonga in Amsterdam a girl came to the DJ desk and told me: “I know this tango!” So I said: “Yes, it’s Melodía del corazón interpreted by Edgardo Donato and his orchestra.” She then explained that she didn’t really mean to know it from the milongas but from her sister’s piano lessons. Her sister was actually rehearsing on these tunes. On another session she told me that her sister was actually playing Fédéric Chopin’s Étude Op. 10 n°3 “Tristesse” in E major. And indeed the main theme of this piano étude directly entered into the tango Melodía del corazón. Not as a cheap carbon copy but nicely rearranged around the Chopin theme. Let’s say that the composers of this tango, Fioravante Di Cicco and Héctor María Artola, have been insprired by Frédéric Chopin (1810-1849).

“The great majority of Chopin’s compositions were written for the piano as solo instrument; all of his extant works feature the piano in one way or another. Chopin, according to Arthur Hedley, ‘had the rare gift of a very personal melody, expressive of heart-felt emotion, and his music is penetrated by a poetic feeling that has an almost universal appeal… Present-day evaluation places him among the immortals of music by reason of his insight into the secret places of the heart and because of his awareness of the magical new sonorities to be drawn from the piano.’ “ [Wikipedia]. So no wonder, they called this tango Melodía del corazón (The melody of the heart). This is also underlined with the lyrics by Carmelo Santiago sung by Romeo Gavioli in the 1940 Donato version. 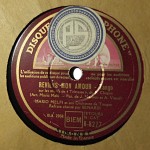 The Edgardo Donato recording is not the only Di Cicco-Artola version, there is also a Francisco Canaro interpretation with the singer Francisco Amor. Both versions are from the year 1940, the SADAIC has the tango registered on the 19-01-1940.

At the root of all these versions there is an even earlier record with the same Chopin melody. This work is not based on the Di Cicco-Artola partition but on an arrangement by Mario Melfi in Paris and it’s called Reviens mon amour. The 78 RPM record contains an explicite note: “sur les motifs de Tristesse de F. Chopin”. This version is interpreted by Mario Melfi and his orchestra himself and the refrain singer is Benardi (Jean Bernardi?). The record has the HMV matrix number OLA 2958 (disk number K-8277) and has been issued in 1939 in France. Maybe it has freely inspired the Argentinian Di Cicco-Artola version. There are a lot of popular tangos which have been composed in Paris and then later performed in Buenos Aires. Let’s quote one of the most famous: Poema, for which Mario Melfi wrote the lyrics. Between the two wars, but also at other moments, Paris has been some kind of tango test tube where a lot of interesting ideas converged.

The tango Vous, qu’avez-vous fait de mon amour ? is an interesting example, originally an Hungarian tango by the composer Tibor Barczi, it has been very popular in Paris during the 1930’s. There are serveral recordings of this tango in France, an often played and timeless version is certainly the one by Orlando et son orchestre du Bagdad from 1933 with the famous singer Tino Rossi. A couple of years later this tango came to Buenos Aires and has been recorded as Sueño Azul by Osvaldo Fresedo. Tibor Barczi’s original title of this tango is Jo a két szemedbe nézni.

These are quite hidden cross references, only recognisable via the melody, but there are other tangos where the reference, for instance, to the classical music repertoire is openly anchored into the title like Danza Húngara No. 5 by Enrique Rodríguez. It is a tango foxtrot transcript of Johannes Brahms’ Hungarian Dances Nr. 5. Now the funny part about this is that Brahms isn’t the author: “Only numbers 11, 14 and 16 are entirely original compositions. The most famous Hungarian Dance is No. 5 in F♯ minor (G minor in the orchestral version), but even this dance was based on the csárdás by Béla Kéler titled Bártfai emlék which Brahms mistakenly thought was a traditional folksong.” [Wikipedia]

Now let’s have a look at the Gershwin question. Just a couple of days ago, as I was playing Sans souci (1944) with the Orchestra Miguel Caló, my friend H. told me that there is something of An American in Paris (1928) and a little bit of Rhapsody in blue (1931) in it. Especially Sans souci, composed by Enrique Delfino, is considered by some as the quintessence of Caló’s musical interpretation. Direct quotation of Gershwin or just brothers in style? The tango Sans souci has been created in Montevideo already back in 1917 by Enrique Delfino. If you compare the structure of the Caló and the Delfino version, you can hear that some connecting parts, repetitions, structures and especially something from the ending part of Caló’s Sans souci are not in the original scores. There is a passage in the ending part where he uses a blue note, a key you can find in Jazz and Blues music. You get minor where you expect major. Also Gershwin used blue notes quite frequently in his compositions. The following extract contains the blue note passage which reminds a little bit of Gershwin: 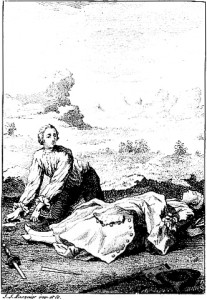 Enrique Delfino was a big admirer of Puccini, Verdi and Wagner and had a deep knowledge about musical theory. So if we are looking for musical quotations or references we can also cross listen to all these beautiful Enrique Delfino tangos and the work of Giacomo Puccini, Guiseppe Verde and Richard Wagner to find intersections in their universes. For instance the lyrics of his tango Griseta (1924) contain characters of Puccini’s opera La Boheme (Rodolfo, Mimì, Musetta, Schaunard), Manon Lescaut (Manon, Des Grieux) and Guiseppe Verdi’s La Traviata (adaptation of Marguerite Gautier, heroine of Alexandre Dumas, fils’ novel and play The Lady of the Camellias). It’s like a tribute to his favorite composers. And like in their plots, this beautiful tango can be seen as an allegory of the tuberculosis disease, a recurring motif in tango texts: See for the original lyrics here and for an English translation here.

But tango wasn’t exclusively inspired from classical or folk music, there have also been references to the popular music of the time. Especially in the late 1920’s and 1930’s there are a lot of foxtrots which are adaptations of world hits like the famous Singin’ in the rain by Nacio Herb Brown published in 1929 and Francisco Canaro’s reprise Cantando bajo la lluvia from 1929/1930. The text is translated to Spanish and the refrain singing is by Charlo, perfect voice for this repertoire. But just listen through all foxtrots by Canaro, Lomuto, Carabelli, Rodríguez and Fresedo and you will find a lot of known songs and tunes. 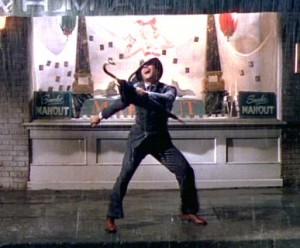 I could go on and on with these references but I just want to conclude this little musical journey with the direct collaborations between tango and other musical genders, like you have seen in my article about Osvaldo Fresedo and Dizzy Gillespie, or the musical influences which changed the típica’s composition later in the 1940’s: Personally I believe that the Francisco Canaro orchestra remained still innovative during the 1940’s. To my ears it became very jazzy and I like especially the recordings with Carlos Roldán. Try to figure out which new instruments have been added to this típica! 😉