Recently I was discussing with a friend who is a milonga organiser about how he handles the royalty payments at his milonga. Normally as a DJ or dancer you don’t need to care so much about these issues and when you own a title or CD you have a personal use license. The organiser of a milonga on the other hand has to care because the collecting societies are watching.

As the friend is playing quite often music from one particular contemporary argentinian tango orchestra with whom he has a friendship relation, he told me that he puts explicitly the names of this orchestra on his listing that he transmits to the collecting society but when he later asked the friends if they received any money from Belgium they answered: “No”. Strange isn’t it? The money seems to get into some pool and the retribution doesn’t seem to be related to what is really played but to some other obscure factors. So if you play Di Sarli at a milonga the collecting society and the majors might give the money to Madonna or some other idol not directly related to tango ;-). 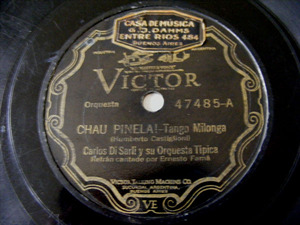 Some time ago, I stumbled upon a Wikipedia page which shows a listing of tango music which is in the public domain. Mainly from Guardia Vieja (before 1916) and some time later. Generally a work get’s into the public domain when the author is dead for 70 years. This is the case for instance in Argentina, Belgium and Germany. For the aforementioned Di Sarli recordings this means that they will get into the public domain in 2030 as he died in 1960. Then again there might be problems when using CD-transfers as they could be considered as works on their own. For being able to play Di Sarli royalty-free in 2030 one might need to get hold of the old 78 RPM records and do the transfers. Things might get even more complicated if Di Sarli wasn’t the composer of the tango. This is the case with the tango Chau Pinela!, the composer is Humberto Castiglione and according to SADAIC the copyright holder. This matches with the info on bibletango.com:

Could be fun to organise once a public domain tango milonga but everybody would need to be very quite as most of these tangos which entered the public domain until now have been acoustically recorded and they sound like sent through an old telephone. And last but not least one needs to do quite some research to get through the jungle of composer, author, interpret and so on … 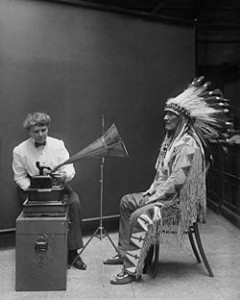